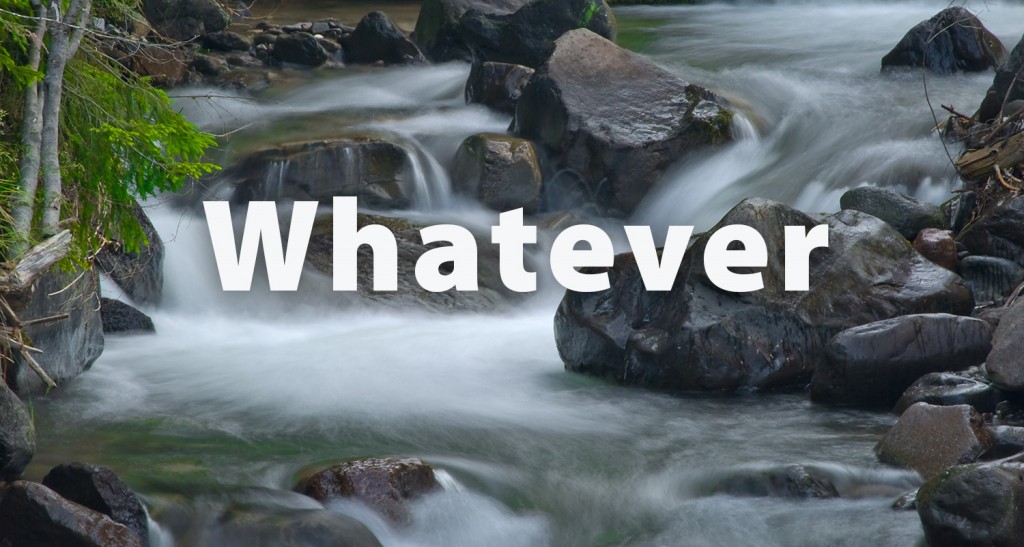 My youngest daughter is now 26. When she was a teenager she had two favorite expressions when I was trying to give her some fatherly advice. “Talk to the hand because the face doesn’t want to know.” and “Whatever.” The first just seemed obnoxious, but I had very mixed feelings about “Whatever.”

My daughter was and is very independent. She is a very smart young woman who thinks for herself. I’ve always admired this about her. In the scheme of things whatever advice I had to give was probably pretty unimportant, but in the moment some of it did have some relative importance and value for her.

There is an aspect of “Whatever” that dismisses, resists and rejects whatever is presented. That’s mostly what it refers to when coming from a teenager’s mouth. And this can be frustrating for a parent, just as it’s intended to be. But there is this other aspect that I couldn’t help but admire and celebrate at the same time.

“Whatever” also means the full acceptance of whatever arises in this flowing river of life and the non-attachment to any of it. “Whatever” is being fully present to what is in the moment with no attachment to it. And this aspect I love. This is also an aspect of the awakened consciousness, of presence, of freedom.

So there are two meanings and intentions of this word “Whatever” and I couldn’t help but gravitate to the later. And I still do. I often feel this second meaning and intention of “Whatever” best describes my experience of life. Whatever arises I am fully open to and yet I never ask it to stay because it is clear that it doesn’t. Life is in constant motion. If something appears to stick around it is only my attachment that makes this appear to happen. And just like in a river, this stagnant area is unhealthy and unnatural. The river is meant to flow. When it stops flowing, it is no longer a river. Life is meant to flow. When it is not flowing it is no longer life. It is no longer Truth.

There are many beautiful teachings from Buddha, Jesus, Krishna and many later and earlier teachers. But when we attach to these teachings, when we enshrine them and make a religion of them, we kill them. They are only meant for this moment, like all of life. Let them sink deeply into you as you sink into them. Let them become you. And then let them go. Be one with life. This has always been your Truth. And life is always moving, always shifting and changing. And so are you. And at exactly the same time something is still and unchanging and infinite. You are both. But none of it is what you attach to. None of it is what you think it is.

Fully allow all of life to enter you, to be you. Resist none of it. And as soon as it comes, let it go on its way. Be fully in the river of life, but don’t try to hold on to any of it. You cannot step into the same stream twice. It is always moving. And so are you, if you let yourself realize and love this.

Whatever arises, accept and love it. But don’t cling to it. It is meant to move. All attachment is an attempt to carry the imaginary past into the present. It is like carrying a dead corpse with you wherever you go. Why do you want to do this? You cannot enter the holy land of the present if you are carrying one shred of the past with you. Keep the attitude of “Whatever”. Whatever arises in this moment is simply what arises in this moment. There is no reason to make a religion, a belief or a life out of it. It is beautiful, incredible, amazing, disturbing, whatever it is. Embrace it completely and let it go.

Even this advice. Take it fully and then let it go. Whatever, dudes. 🙂
And many thanks and much love to my daughter, Lindsay, for this wonderful teaching.

Guidance for the Online Weekend Silent Retreat Friday, September 10, 2021, through Sunday, September 12, 2021 In a society of continuous input and mental stimulation, there is no greater gift for … END_OF_DOCUMENT_TOKEN_TO_BE_REPLACED