Life and death cannot be separated. They’re joined at the hip. When we try to separate them and celebrate life while fearing and rejecting death, we end up living an artificial imaginary life. This only leads to suffering as reality always presents itself no matter how tightly we cling to our illusions.

Our culture has conditioned us to celebrate and believe in youth, newness, and a youthful, perfect beauty that never changes or fades. We avoid images of death and decay because they expose our conditioned illusions. Our illusions crumble in the face of too much truth.

We don’t like to think our minds have been conditioned. We like to think that our thoughts are ours. Those of us who have spent time in the advertising industry or in other areas of mass media know very well the power of the media to condition beliefs, opinions, preferences and desires. Media shapes the way culture thinks and feels. It is unnatural for us to think and feel about life and ourselves the way we do. These thoughts and beliefs have been conditioned by our culture.

I admit to once being a Creative Director of a large advertising agency. I apologize for this. It’s a poor excuse, but it’s hard to make a decent living as an artist and I had a family to support. Knowing the powerful influence we had over the way the population thinks and feels, most of us imagined we were immune to this. One week I decided to test myself to see if this were true. I decided that if I had a strong desire to purchase anything I had seen in an advertisement, I would wait one week before acting on this desire. During that week I would simply watch my mind each day. I was shocked to discover that I was just as conditioned as anyone else. Not much different from Pavlov’s dogs. When the right triggers were given, I would salivate just like those dogs. After the results of my experiment, I began to take the responsibility for what I was doing far more seriously. Eventually I left the business.

The Japanese wabi-sabi aesthetic is one way to de-condition ourselves and learn to live in reality. Wabi-sabi celebrates the impermanent, the natural, the changing nature of life. It sees that life and death are not separate. Where our contemporary culture celebrates youth and this idea that people and things can be permanent, wabi-sabi celebrates reality. Everything is changing. Youth become old age. The new car becomes the old one. There is nothing wrong with this. It is the reality of life and it is profoundly beautiful. If we can let go of our conditioning, the beauty of life as it really is becomes clear. 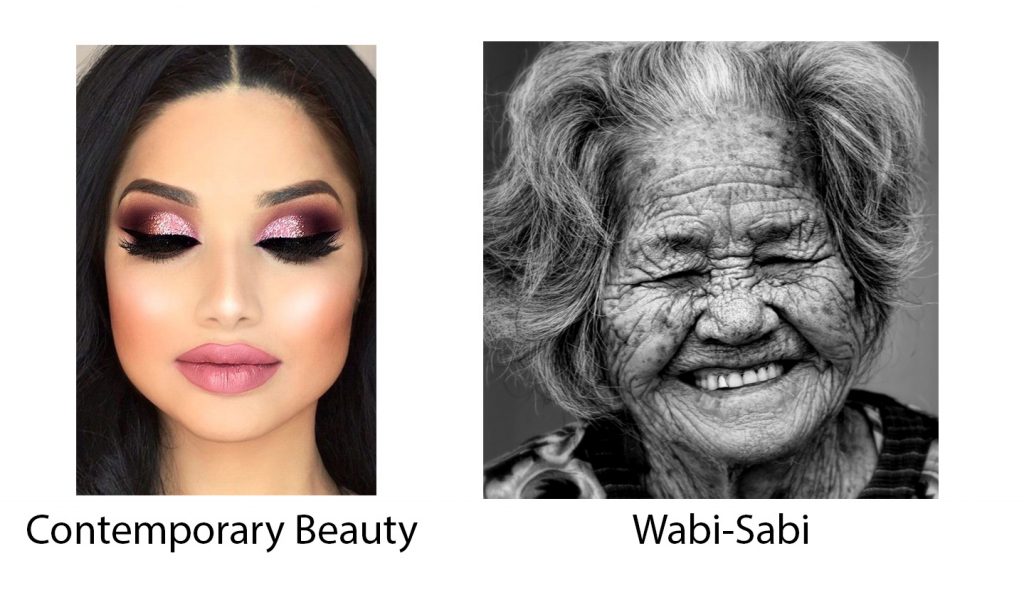 Where our culture attempts to cover up and hide the reality of death and impermanence, wabi-sabi celebrates it. Instead of turning away from the wrinkles in this woman’s face or attempting to cover them up with make-up or Photoshop retouching, can you see the profound beauty in these wrinkles, these symbols of a life truly lived. Seeing the beauty in this is wabi-sabi.

My grandmother was an amazing woman. I was truly fortunate to have her in my life. As I knew here in her 70s and 80s, she didn’t act the way other women her age acted. She didn’t dye her hair or go to a beauty salon in an attempt to look younger. She never wore makeup. She barely combed or brushed her hair. It was usually a tangled mess. She cared nothing about the latest clothes. She usually wore the same sweater filled with holes. But there was an aliveness about her and great joy. It was wonderful to be with her and everybody felt that way. She loved people. She loved life. And she loved me.

My grandmother gave me the greatest gift that any human can give to another. She taught me not to fear death. When she was in the process of dying and had at most a month left to live, she told me about her decision not have any medical attention for her stomach cancer. She said she had seen her friends go through surgery and treatment and it just wan’t for her. She told me she had lived a wonderful life (She was eighty-five at the time I think.) and she was ready to go. It was very clear that she had no fear of death at all. It wasn’t because of any religious belief or belief in an after life. I don’t think she really cared about that. She had enjoyed a long life and now she was ready to go. She accepted her death fully without any reservation at all. It was as natural as getting up in the morning and brushing her teeth.

I was in my early 20s at the time. Up until that conversation I had been influenced by the media and my society to fear death or at least think it was a negative thing. But my grandmother’s complete lack of any fear changed that. It wasn’t all at once, but it began a process of changing my previous conditioning. In all my media experiences of death, nobody every faced it as something completely natural and nothing to fear. My grandmother did. And I will always be grateful for that.

Until we can fully accept death as the natural process and inevitable end of our life, we cannot fully accept life either. That fear of death holds us back from fully living. My grandmother lived her whole life free of that. That’s why she lived so fully. That’s why she accepted everything in life. She accepted her aging gracefully without trying to appear younger. She accepted and thoroughly enjoyed every moment of her life. And she accepted her death just as gracefully, naturally and completely. My grandmother was a prime example of wabi-sabi in action. Her life itself was a work of art. I was very privileged to have seen it and been a part of it.

Wabi-sabi and Zen itself doesn’t reject youth in favor of the old. It accepts everything. It appreciates and is grateful for everything in every moment. Because of our conditioning we favor youth over old age. We favor wrinkle-free skin over wrinkles. We favor the shiny and new over the rusting, deteriorating and old. Because of this we are out of balance. We don’t need to practice accepting what we already accept. That’s already done. We need to practice accepting and appreciating what our conditioning has taught us to reject and fear. That’s where the Japanese aesthetic approach of wabi-sabi can help us. It can return us to a natural way of life, free of the conditioning that has forced us out of balance with nature and reality.

The thoughts we have that reject and fear some aspects of life are not our thoughts. We didn’t create them. We were conditioned by society, by men and women like me in the advertising and media worlds. We would never tell you that wrinkled skin is beautiful in a woman because there is no profit in that. Wrinkles are free. They are a natural part of aging. We would never tell you that the shiny new car we’re trying to sell you will begin to rust and need repairs in a few years. Rust and deterioration are a natural part of life. That’s reality. Advertising doesn’t deal in reality. There’s no profit in it.

To live a natural, balanced and healthy life, we need to live in the real world, not the world of our conditioned thoughts. When we accept, honor, appreciate and love life as it really is, whatever that may be, without trying to change it or wish it were different, we will live a life of true happiness. The world perceived through our conditioned thoughts cannot give us that.

There is a lot of confusion and misunderstanding about Samadhi. This is natural as it cannot be translated into words, but in this video, I do my best to describe my experience of Samadhi. Hopefully, … END_OF_DOCUMENT_TOKEN_TO_BE_REPLACED