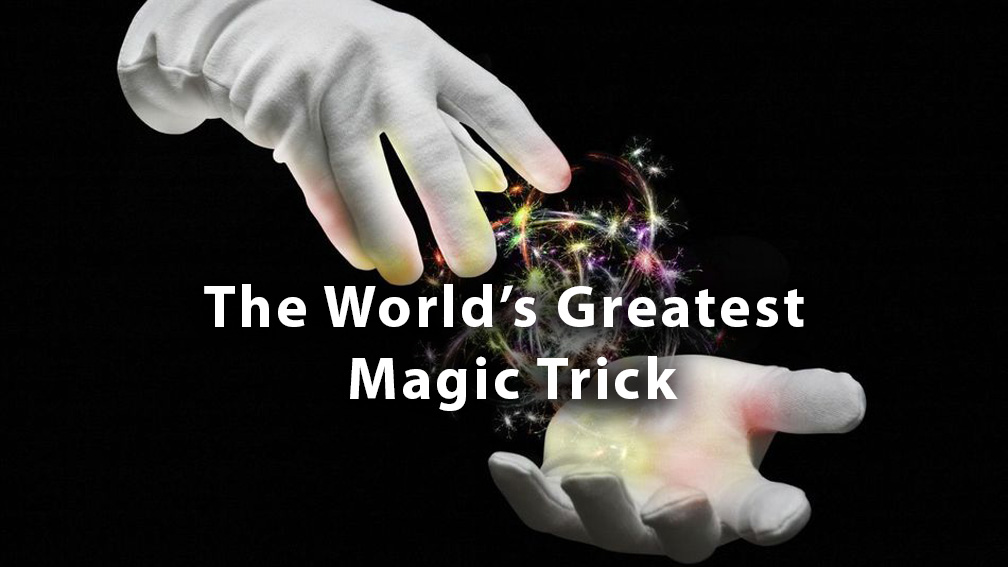 If you love magic tricks the way I do, you may also be fascinated with figuring them out. How did they do that? Magic tricks are illusions and, if they are done skillfully, they appear absolutely real. I think it is natural to be intrigued with magic tricks because the clever magic tricks professional magicians perform actually point to a much deeper and more fundamental magic trick that is a big part of our every-day life. When we watch stage magicians, even though the illusion appears very real, we know it’s not. That’s the fun of it. If you actually believe the magician pulled a card out of your ear, it wouldn’t be fun at all. You’d probably seek medical attention. But this other illusion I’m thinking of we do believe is real. And that’s where the trouble comes in.

Most magic tricks use distraction as a fundamental tool. While we’re watching the right hand, the left hand is setting up the illusion. And the magic trick that is continually going on in your daily life also uses distraction. You might say both the illusion and the magician is the internal thought of the separate self, what you commonly call I, myself. While your attention is riveted to this thought of me, you’re distracted from seeing what life and reality are constantly showing you – there is no me. There is no separate self.

In this way, you are actually living in this magic trick, this state of perpetual illusion, without even knowing it is a trick of the mind. It feels exactly like reality to you. That’s why I say this is the greatest magic trick there is.

Just as the stage magician has a number of assistants, both seen on stage and behind the scenes, your mind magician also has many assistants. Those assistants – friends, family members, colleagues, teachers, society, language – all reinforce this illusion, which they also believe completely. Without these tireless assistants, the trick would fall apart. The mental distraction alone would not be enough without this constant reinforcement.

Because this particular illusion is nowhere near as much fun as the ones you see in a magic show, and, unlike the magic show, actually create suffering in your life, at some point you develop a strong desire to peek behind the curtain. You begin your spiritual search. You begin doing spiritual practices, like meditation and self-inquiry. And, eventually, if you are diligent and focused, you do get to peek behind the curtain. And you discover that there is no separate self there. There is no separation at all. That was just the smoke and mirrors of distracting and heavily reinforced thoughts.

You may never be able to create a mental concept of what you do find behind that curtain, other than the same analogies and metaphors other finders have used. But these are just pointers. What you discover cannot be described in a language or thought that is incapable of describing it. But it doesn’t matter. You are free. You have discovered the greatest magic trick of all time. You’ve broken through the wall of illusion and the sun of reality is shinning brightly.

Is it surprising you want to tell others about it?

The Sedona Zendo of the Awakened Heart is located at 120 Birch Blvd., Sedona, Arizona 86336. Birch Blvd. is in West Sedona across Route 89A from the Whole Foods shopping center. There is a car wash … END_OF_DOCUMENT_TOKEN_TO_BE_REPLACED